I've been using a term lately that I picked up on one or more of the fora I frequent but I thought I would talk about it a bit - restovation. It's being used as a catch-all when a homeowner is doing some remodeling and he wants to be sensitive to the original architecture - a composit of Restoration and Renovation. Sort of the opposite of a remuddle (another meme indicating that a remodel done poorly, especially one that isn't sensitive to the building's intent or architecture) - I'll discuss both in regards to mid-century modern homes:

Restovation
My take on a restovation is to make architectural changes that are close to the same or at least sensitive to the original builder's intent - basically to make alterations that either can't be detected, or to remove a poorly applied remodel by replacing or "fixing" with something that could have been part of the original builder's construction. When at all possible I try to keep original features and refurbish when necessary (at minimum a good cleaning does wonders - sometimes I'll try to fix fixtures and such or replace with something that's close). Of course there's varying degrees of restovation - some things that are missing simply can't be replaced and compromises have to be made, especially when fixing a bad remuddle. The trick here is to find replacements that aren't complicated - usually the simpler the better. The other trick to being successful is to use patience - that missing something or other could be waiting on the curb in your neighbor's trash a year from now.

Remuddle
In general a remuddle is any remodel that isn't sensitive to the architecture - like replacing the front door with some obnoxious Home Depot purchased beveled glass monstrosity or putting a bay window on the front of a modern house. Neither of these would have been part of the original mid-century modern design and only "muddles" the clean lines or hides that the house is modern. You'll see variations of this - the addition of shutters, ornate exterior sconce lighting, an added Bay window, the list goes on.

A good restovation would incorporate good, clean design changes, keeping elements that are both appropriate and still useful for the time we currently live in. I'm not at all opposed to updates, especially to the kitchens and bathrooms of mid-century modern homes - often the tile is cracked or otherwise rundown and defective, or the original cabinetry is failing and it's simpler to replace rather than repair - plus you can't beat the new cabinet hardware and storage doo-dads that are available now. The trick is to remain sensitive to the original house design and intent (French Provincial cabinets simply look ridiculous in these houses). When possible I like to keep the original kitchen provided it's in good shape and restorable - I'll discuss this more in future posts by showing effective methods of doing so.

A bad remuddle would have one or more of the following :
(I lifted this from the Lotta Living forum post "100 Ways to Screw Up Your Mid-Century Modern Home" with a couple of edits)

Here's a good article about 4 renovation trends that
should go away. Yesterday (10.10.09) Cindi called to tell me there was a large puddle in the middle of the yard. I came home to find water bubbling from the ground - since it was about 15 feet behind the meter I figured it was a leak in the galvanized water line - something we've been wanting to fix but there have always been other things more pressing. After a phone call with our friend Bruce Wilson (Master Plumber), he volunteered to come by today (Sunday) and help hook up a new line. I woke up early this morning and spent time moving things around in my shop where the water line ties in in the basement. I then ate a quick breakfast and went outside to start digging while Bruce purchased the fittings he'd need to complete the job. We decided to use Pex pipe - if you don't know about this stuff Google it - the stuff is amazing.

View from the Meter back to the front spigot View from the spigot out to the street I managed to get about 20 feet (total run about 70 feet) dug when Bruce got to the house - Cindi started digging from behind the meter so by the time Bruce had the meter dug up, all but about 15 feet remained to be dug in the middle. I think I started digging about 11, Bruce got here about 12 and we were done with all the hook ups by 4. After Bruce left I finished waterproofing the hole in the basement block and filled in next to the foundation. While the front was open I added a line for an external circuit so I can add an outlet to the front (not tied in yet). I also spread out any remaining dirt and raked up to get everything looking back to normal. It's been quite a day. 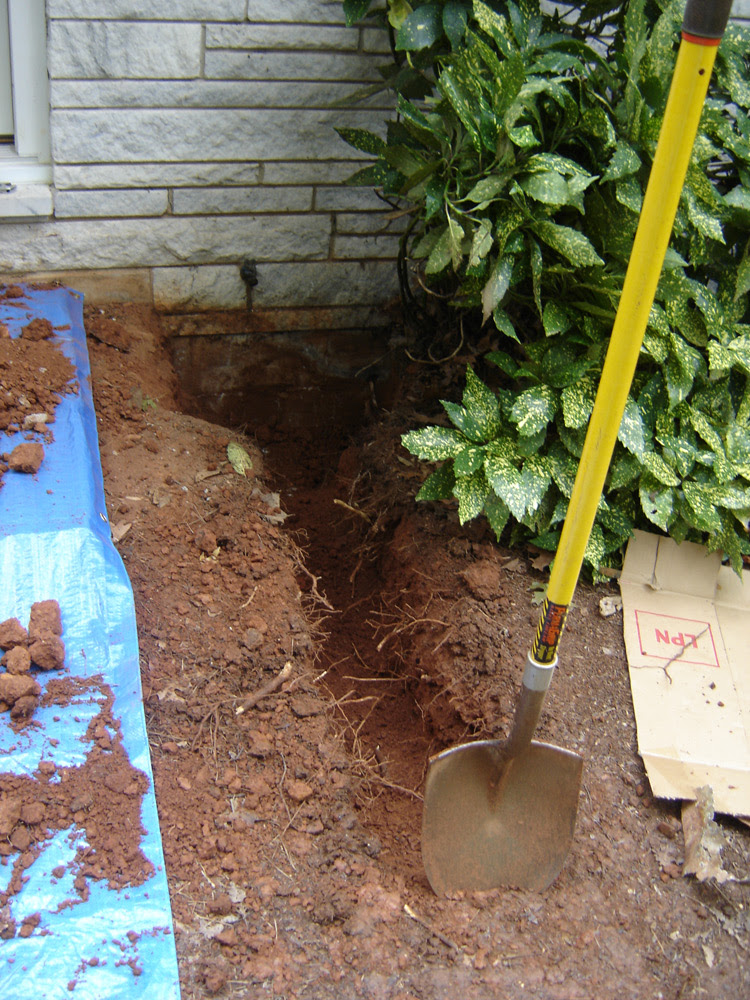