Review on "Consider the Ranch" Lecture

I wanted to report a bit on the DOCOMOMO "Consider the Ranch" lecture held on 8/21/07 at DWR in Buckhead. It was attended by 15-20 people (I didn't do a head-count) and was once again a very informative and enthralling presentation. Part 1 (which I missed on the 14th, however the speaker, Richard Cloues from the Georgia Department of Natural Resources, Historic Preservation Division, did a quick 15-20 minute review) featured the development of the ranch house in the united states - basically its influences and first appearance outside of a typical western farm or ranch setting (thus the name). He made mention of "Chicken House Gothic" which I found enlightening and humorous, and discussed Cliff May as well as Joseph Eichler's influence (the latter on the post and beam construction typical of Eichler's dwellings). There was also mention of Frank Lloyd Wright's prairie home and his influences on ranch design (in particular the prominent fireplace as a design element).

Part 2 focused on the appearance of the ranch house in Georgia. The ubiquitous "red brick ranch" so popular in Georgia, was highlighted several times, but the primary focus was on classifying the actual building of the Ranch into developments, sub-divisions, in-fill and stand-alone construction in context by year and region. Some significant information I'd like to bring attention to:

In any case, for those who attended, the lecture was very informative. For those of you who couldn't attend, my hope is that a transcript will become available at some time, as well as some of the photographs used in the lecture.

Posted by John Eaton at 9:33 AM No comments:

Greetings from the UK! 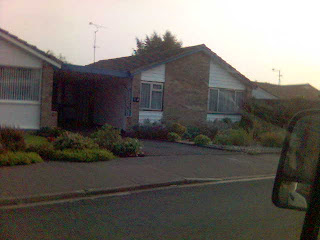 I received this email from Sharon in the UK

Hello , You may or may not find this interesting, but we have purchased a modernist bungalow in Horsham Sussex uk. 1968 that needs complete restoration. We are currently opening out all the rooms to give a light and open plan airy feel to the house and it's back garden. We love late 50's/ 60's furniture. Perhaps you know of some good web sites that might be able to help us?
Ignore the chesterfield in the pic, isn't so Victorian ha ha. !! Would you like to see a pic or two on our back garden. No grass to cut ! oh bliss. 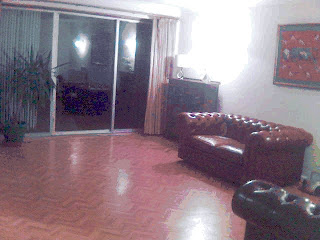 This is the first Modusmodern "fan" email - thanks for the images Sharon - love the herringbone floor! Keep the images coming!

Posted by John Eaton at 9:30 AM No comments:

I missed this DOCOMOMO seminar on the 14th but plan to attend on the 21st. The host is the DWR store in Buckhead. These seminars are usually very good and informative, plus you get to meet other modernists from around the Atlanta area.
What: Consider the Ranch, a look at the development of the Ranch House
Who: Richard Cloues, Georgia Department of Natural Resources, Historic Preservation Division
When: 6 PM, Tuesday August 14th (part 1); Tuesday August 21st (part 2)
PLEASE RSVP: info@docomomoga.org
Where: Design Within Reach, Atlanta Studio, 295 E Paces Ferry Rd, NE, Atlanta, Georgia (404-841-2471). For directions, click here.
-- John
Posted by John Eaton at 6:33 PM No comments:

John Eaton
I've been writing about stuff that interests me for many years, initially with some free web space provided by my ISP back in the 90's and continuing with various blogs and websites today, separated by interest. Many I haven't touched in a few years due to time constraints but the subjects are still on my mind.