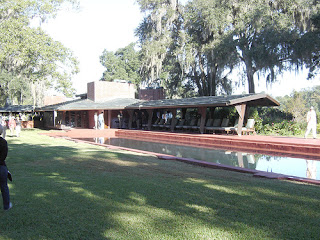 I was invited by Nelson Brackin (President of the Friend's of Kebyar: http://www.kebyar.com/) to attend the Biannual public tour of Auldbrass in Yemassee, South Carolina. Auldbrass is the only Frank Lloyd Wright designed southern plantation nestled on property along the River. From the Beaufort Open Land Trust site (http://www.openlandtrust.com/auldbrass.html):

Designed by Frank Lloyd Wright in 1939, the Auldbrass Plantation buildings, consisting of the main house, kennels, stables, barn and various outbuildings, were constructed during the forties by the late C. Leigh Stevens who called on Wright to design a self-sufficient modern plantation for farming, hunting, and entertaining.

In keeping with his theories of organic architecture, Wright designed Auldbrass to be in harmony with the landscape of which it is a part. Constructed of native cypress boards laid diagonally at 80 degree angles and held by brass screws, the exterior is intended to conform to the lean of indigenous live oak trees, while the abstract forms of ornamental rainspouts suggest hanging clumps of Spanish moss.

In 1987, the plantation was purchased by Joel Silver, a successful film producer and ardent admirer of Frank Lloyd Wright. Mr. Silver has meticulously completed the majority of Wright’s original plan, thus fulfilling Wright’s and Stevens’ dream of making Auldbrass a great 20th century architectural treasure. It is listed on the National Register of Historic Places.

We drove down Friday so we could get an early start for the tour - actually arriving about 30 minutes before the tour started at 10:00 AM - which was beneficial as they allowed those already there to enter early - the initial group was about 25 people (there were 2000 tickets sold for the 2 day tour). The docents for the tour were standing at the gate for the estate, which is surrounded by a wooden fence (angled at 80 degrees to emulate the other use of 80 degrees in the wall angles - this is repeated continuously in Wright style). The walk to the main buildings allowed for little preview of the actual structures, until almost upon them so the "reveal" was heightened. It was a beautiful day, slightly chilly but warming up nicely as the day progressed. The place is truly spectacular.

Lunch was held at the Old Sheldon Church right around the corner. Seems the ruins were from the first attempt at a Greek style temple in the Americas. Images and info here: http://www.charmingtowns.com/dir/society/historic_sites/sheldon_church.html

In all it was an exciting and delightful trip, which I hope to do again. It's also exciting to see such a well done restoration (kudos Joel Silver!). From the book (which I purchased on Amazon) it appears Mr Silver plans to build the additional structures planned but not completed (with the help of Eric Lloyd Wright).

John Eaton
I've been writing about stuff that interests me for many years, initially with some free web space provided by my ISP back in the 90's and continuing with various blogs and websites today, separated by interest. Many I haven't touched in a few years due to time constraints but the subjects are still on my mind.