I found a few shots that I took at the DOCOMOMO Home Tour reception (this was the night prior to the actual tour on Saturday) at * context * gallery. Images are of the volunteers, guest speakers and some very interesting furniture on display (all for sale - see http://www.contextgallery.com/ for more details). 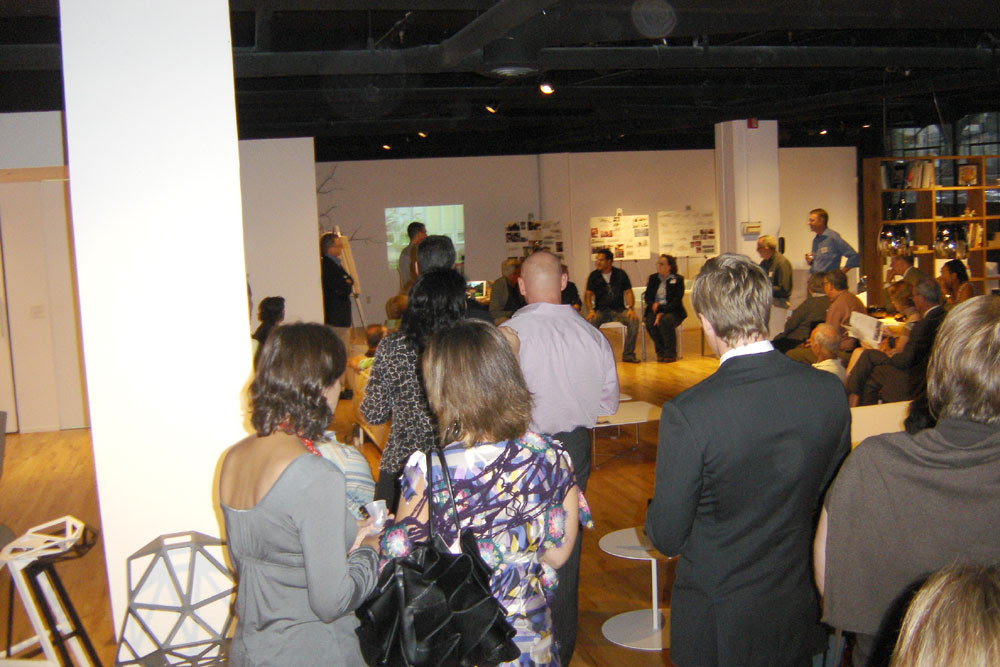 Check out these Cantilevers:
http://www.mvrdv.nl/_v2/projects/015_wozoco/index.html

Read the rest of the post "Architecture From Another Planet - 25 Incredible (Real) Abodes"
http://www.intlistings.com/articles/2007/architecture-from-another-planet-25-incredible-real-abodes/

The final house on the tour will be of most interest to this group. This house is owned by Jeff Dowd and his wife and is also in the Amberwood sub-division. It's located on the crest of a ridge so the yard slopes both to the front and back, as well as to one side. The owner knows very little about the original designer of the house and has spent the last few years since his purchase in doing remodels, adding an addition behind the left side (one bedroom was made into an office, the garage on that side closed off for storage, parking moved to the rear part of the addition and additional family room space added to that side). The house has a full basement that is used as an apartment by Jeff's mother (it has a private entrance and driveway on the right side of the yard, below the decking). The master bedroom and master bath have both been reworked by Dowd as well as the rather involved landscaping.

When purchased, the rear wall had been pushed out to incorporate the patio (original fire-pit style grill is still attached and uses the existing chimney for ventilation, though it's unused). An arbor-style extension (extending the existing beams past the rear wall glass-wall) was added to the back to provide some much needed shade to the rear of the house. The front door has been replaced by a really beautiful, hand-carved mahogany double door from Brazil. The over-all effect is a large living expanse open to both front and back with some amazing birch trees obscuring the street from the living room.

Jeff decided to keep and have restored the original wall-mounted oven with slide-out stove. To the right of the sink is an original counter-top Nutone blender unit. The bathroom remodel is stunning, with a large tiled tub and exterior sliding glass to the exterior and over-head skylight. The real beauty of the house is in it's modernistic, very Asian design elements - the owner had viewed the botanical gardens in Portland used these as influences in the deck railing design (top rail is roof-beveled to shed water).

This is the second part of three describing the DOCOMOMO Home Tour held on 2007.09.29 in Atlanta, GA. The second house on the tour was also designed by Robert Green and construction was finished in 1964, I believe. The story is that RG had designed the home for a client who then decided not to build. Around the same time, RG was designing homes for the Amberwood development - this was a unique neighborhood with a business model of selling unbuilt lots - the buyer would then either purchase plans and construction from the developer or bring in his/her own architect and building crew. In this case, RG built one custom house (the Nicoll house - more here: http://www.modusmodern.com/robertgreen/nicoll.asp) and had been hired to build the entryway to the neighborhood - the developer saw the original plans Robert had created and hired him to adapt them to the lot it's currently on - the developer's name was Robert Witcher (more images and the plan here: http://www.modusmodern.com/robertgreen/arrowhead.asp).


The Witchers lived in the home with their two small children for 7 years before selling to the current owners (actually the surviving second wife of the second owner). The House featured an 8x8 tiled bath that could be filled with water that the children referred to as their "kiddie pool." Unfortunately I didn't take any images of the room, as it's quite spectacular with a full skylight above the space and light green jade tile, commode and sinks. The house is quite unusual with a main structure making up the "point" of the arrow, a long hall with small alcoves opposing bedrooms, and a "tail" family room that was formerly a carport - RG was hired to transform the carport into the current family room and an external 2 car garage was added - at some point the garage was extended upward and a guest house was built, much to RG's dismay. Two additional structures were also added, a pool house and a workshop - neither of these three structures have more than a passing resemblence to the original structure (the garage has obvious lines in the bottom floor and some details were carried over, but the general lines were all abandoned).

The long hallway reveals many surprises, FLW style, with new rooms, alcoves, shelving and geometric shapes around every corner. The main living room comes to a slightly acute point, with a two sided fireplace in the opposite corner. The front eave of the house actually comes down to chest level making this a remarkable construction indeed.

Part 3, the Dowd residence, will go up shortly.